Where is the gate to the spirit world?


For anyone who believes in the eternity of the soul, death symbolizes transformation, transition from one form of existence to another - between different dimensions ...

- Why am I so occupied with the topic of death?
The subject of parallel realities and the transition between different dimensions has fascinated me for years (all of my artwork is, in fact, a documentation of what is happening out there).

Each of us experiences such a transition of consciousness during sleep and dream state when the spirit and soul leave the proximity of the body and ascend to higher dimensions to recharge and process the experiences a humen went through in waking hours.
Without this important process, one may lose his sanity.

According to the Zohar, when a person dies, he passes through the Cave of the Patriarchs (where Abraham and Sarah are buried) on his way to the higher spiritual worlds.

The mystical Kabbalah teaches that the first place where the soul arrives is the lower heavenly hall (lower level of paradise), which is located on the boundary between our world - the world of action (Assiah) and the world of creation (Yetzirah) above it.

In ancient cultures, the inhabitants of Mesopotamia believed that the gates to and from Garden of Eden were located at the ends of the Milky Way, known as the River of Souls.

The place to which the soul arrives is wide and boundless, pure and clean, illuminated by a great light that does not resemble the sunlight here on Earth. 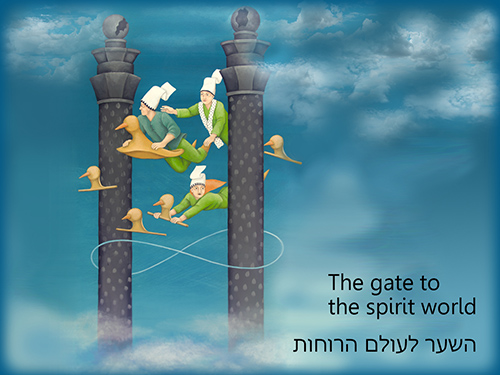 Dr. Michael Newton conducted many hypnosis sessions in deep trance and led his patients to recall the moments after death in previous incarnations.

According to the testimonies he heard, patients reported that the tunnel in which their soul had passed after leaving this world was the gate to the spirit world.

Descriptions of this location varied from one patient to another - some patients said they saw the tunnel open over their bodies immediately after their deaths, and some said they had to rise higher above Earth until they entered the tunnel.

If the subject of death frightens you, consider exploring the belief about the immortality of the soul.

As is known - according to scientific theories, death occurs when brain activity stops.
The brain is considered an organ that activates the living body and stores all the memories of man.
It is the "inner self" of man, the system that controls and monitors.

But what stands beyond the brain?
What causes electrical pulses to continue or stop?

According to spiritual teachings, the mind is a physical vessel that serves the soul and is operated by it.
A dead brain is a brain that the soul was separated from it.
The electrical pulses cease, and the gray tissue becomes lifeless.

The human soul is released and continues to exist after leaving the physical body, and the consciousness moves to another dimension.

Ready to see more of my metaphysical paintings?
Please visit: The Magnificent Art of Orna Ben-Shoshan