Where and How Can We See Parallel Worlds

Can life exist in other forms besides the one we live in? Can we access such realms? Can anyone see them?

The art world, especially the surreal, visionary and fantasy genres, suggest a glimpse into the vast range of possibilities that exist beyond normal human perception.

The ongoing desire to discover an alternate fantastic reality, which is perfect and free of the limitations of time-space, begins is many people’s childhood. As children, we were often curious about who we are, and what this life is all about. In many cases, the death of a person we knew, have raised many questions about the after-life. The gnosis about existence of realms beyond is imprinted in the human collective experience. There is a vague memory in every individual’s mind regarding other dimensions of existence.

Where did we come from and what is the purpose of this life? This question is often asked by humans of all ages. Did we come to this world from another realm? Can life exist in other forms besides the one we live in? Can we access such realms? Can anyone see them?

In the second half of the 20th century, modern science has developed new tools to explain the existence of life in more than one dimension. According to the “String Theory”, the universe is spread in ten different dimensions consisting of different energy vibrations, and the universal energy field is composed of “membranes” and other esoteric shapes.

The Realm of Matter:

All that exists, seen or unseen, is an infinite field of being, composed of one dimensional strings that vibrate in an infinite spectrum of frequencies. The infinite energy field contains all that there is, it is the source where all forms of life exist. At the lowest range of this wide ray of frequencies, there is a “thickening” of energy fields.  The lowest frequencies which crystallize into matter, are known to us as the “physical” world (dimension), which is measurable, and can be recognized by our 5 senses. All other forms of life, which vibrate in higher frequencies that are beyond human perception, create the parallel realities of other realms. Scientists assume that parallel realities were created by the “missing” 80% of the mass released after the “Big Bang”. This mass was transformed into energy fields that compose the other dimensions. Different theories suggest that we exist in the 3rd dimension (out of 10). This is the most condensed energy field which enables the formation of matter. Other dimensions contain different forms of life, with different levels of consciousness in different frequencies. All the physical attributes known to us at our physical world, such as electro-magnetic fields, gravitation, and nuclear energy, are singular manifestations of the universal energy.

According to the mystical Kabbalah, which investigates universal secrets and the essence of life, we can learn that the reality we are aware of represents a tiny section of the whole. The Kabbalah indicates that the larger part of existence, the dimensions that we cannot perceive with our human limitations, is indeed the reality itself and our physical life is just an illusion.

The Kabbalistic “Ten Sefirot” – or Ten Spheres – is a clear manifestation of the ten dimensions of the universe.  The nine higher spheres existed before our physical world has been formed. The highest sphere is “Keter” (Crown) – a dimension of eternal light, the source of everything that was created, a dimension with no limitations. The following eight spheres are stemmed out of the highest sphere, and actualize their previous sphere as their energetic consistency become more and more condensed. The energetic volume of every sphere is one tenth of its previous sphere. The world in which we live is the sphere named “Malchut” – (kingdom), the realm of matter.

The theory of parallel dimensions was first contemplated by scientists in Princeton University. A recent research by Prof. David Dutch of Oxford University has proven the theory of parallel worlds. He claims that we can only see a minimal portion of the large reality. Our world is only one of many possible hidden realities, only one single form of existence out of infinite dimensions that exist at the same time. According to quantum physics, there is more than one universe, and we can interact with alternate dimensions of being.

Parallel realities may exist by different physical laws of time and space. Their transpirations can be manifestations of another set of possibilities that are alternative to the occurrences we witness in our own reality. They may be happening just a few millimeters away from us, but we cannot be aware of them because their energetic frequencies are unperceived by us.

The human soul, which is an integral part of the immense universal energy field, has a subconscious connection with different forms of being. As humans, we are “trapped” in a physical body that limits our large vision of the universe. Consciously, we can only be aware of aspects that can be absorbed by our five senses. People who developed their sixth sense can access knowledge which is beyond the physical existence.

According to modern physics, the passage between our dimension and parallel realities is in the form of “black holes” or “worm tunnels” that exist in some mysterious locations in the universe. Mankind has vague memories (or traces of memories) of other existing dimensions, and there is an ongoing quest to overcome the limitations of the mind and access the large picture.

Humans are able to connect with alternate realities in some conditions:

As our souls leave our bodies during sleep, they can access higher realms and get recharged and reset.  According to the Kabbalah, the sleep process is considered as some form of death, when the soul departs from the body. Practicing Jews have a special morning prayer to thank God for returning the soul back into the body upon awakening.

In deep trance meditation, people can silence their ever active minds and connect with the eternal universal love energy. Psychics and metaphysical practitioners, whose sixth sense is developed, can access knowledge through deep trance as well. At death, the spirit leaves the physical body and moves on to a higher level of consciousness, which is limitless. In fact, this is the ultimate transformation into another dimension - a total change of form. As for “regular” living people, reading fantasy literature or watching science fiction movies may open their imagination to ideas and possibilities which are beyond “normal” existence.

Where Can You See Parallel Worlds?

The art world, especially the surreal, visionary and fantasy genres, suggest a glimpse into the vast range of possibilities that exist beyond normal human perception. Some surrealist artists are, in fact, sort of clairvoyants who absorb images from alternate forms of being. According to social perception, they “capture” visuals through channeling. 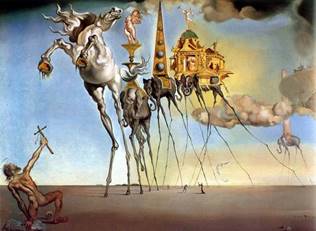 Look at Salvador Dali’s paintings “The Dream” and “The Temptation of St. Anthony”: What if his vivid surreal imagination” describes an alternate reality where such scenes take place?

Rene Magritte’s painting “The human Condition” is a clear illustration of one plane (The image on the canvas) merges with another (The actual landscape in the back). Magritte’s famous “Chateau des Pyrenees” depicts a huge rock floating over the ocean, with a castle built on its top.

Well – everybody knows that a huge boulder cannot float in the air – but can this scene be possible in a dimension that has a different set of physical laws?

Remedios Varo, a Mexican surrealist, is a terrific example of a clairvoyant artist. Her paintings depict a series of fantasy scenes that seem to be taken from alternate worlds: Look at her painting “The Alchemist” and see reality extending from one dimension to another.

Another member of this group of artists is Orna ben-Shoshan, a fascinating self-taught visionary artist. Her paintings originate from a mysterious, far-out world and reveal colorful esoteric occurrences, in which creatures and objects interact in unpredictable ways. The metaphysical atmosphere in her creations draws the viewer into a journey through alternative realities. As a life-long student of Kabbalah and mysticism, Orna has always been fascinated with the gateway points – the borders between different dimensions. Her artwork reflects a wide range of potentials, as she explores the different aspects of transformation from one form of existence to another.

Here are a few examples that illustrate her inductions:

In her painting “shedding Heavy Traces”, two figures are carrying a person whose upper body emerges from an open carrier. The person is on his way “out” of this world – he is on the verge of leaving this realm of existence (death) and progresses into another dimension. His lower body has already disappeared into what can be interpreted as “nothingness”. On his departure he drops away heavy packages that symbolize the material load he had to carry throughout his life in the physical realm.

The painting “Four Twin Souls” depicts four figures, that exist in one dimension, and being spiritually fed by their clone entities that live in another dimension.

Orna’s painting “Departure” shows a woman carrying a pod, approaching a staircase through which she will embark on her travel into another dimension. The angel at the top of the staircase unveils the passage to her.

In her painting “The Elevator” two figures are carried in a wooden box over a hallucinated plane. Their faces are covered so that they can’t see the journey’s track. A winged figure carries the cargo through air. This is a scene that deals with metaphysical transformation – as the passengers in the box are being moved from one level of consciousness to the other.

Travelling through air, diffusing from one plane into another, riding a floating structure, opening a door to the void, climbing a staircase, or dissolving landscapes - there are many possible ways shown by art as a means to pass into alternate dimensions. If you are curious about the worlds beyond – this is the place to see them.

As the human memories of parallel life forms fade when a soul is reincarnated into a new physical body, glimpses of memory may appear in our minds time and again, for a fraction of a second. Capture these visions! These moments of enlightenment come to remind us that our earthly life is just one of infinite possibilities in the mighty universe that created us.

Artist Orna Ben-Shoshan conceives the images she paints through channeling. All of her paintings are completed in her mind before she transfers them onto the canvas.

Orna Ben-Shoshan has been an autodidact artist for the past 30 years. Her artwork was exhibited in numerous locations in the USA, Europe and Israel. Her Major motivation as a visual artist is to share her visions with others to expand their consciousness and inspire new ways of thinking.

To see more of her artwork, please visit: http://www.ben-shoshan.com

Orna is the co-creator of the new and innovative "King Solomon Cards", which are based on her artwork and combine her metaphysical images with ancient Kabalistic symbols. To see more, please visit: http://www.k-s-cards.com