The Powers of the Hebrew Letters -
How We Can be Empowered by them when coping with challenges, and gain important Insights


According to the Kabbalah, the energy of the Hebrew letters drives the world.
The Hebrew letters were formed even before the creation of the world, together with the system of the ten spheres (Sephirot) through which the Creator manifests its power in the world.

The 32 Paths of Wisdom - are the tools the Creator activated when it decided to create everything that exists:
These are the ten Sephirot, and the 22 Hebrew letters that connect between them.

The process of creation is continuous, and the effect of the Hebrew letters on our lives never ends.
Everything that exists in the world consists of letters, all the natural phenomena, and so does the human soul and the human body.

What sets us apart from all other creatures, are the unique personal letter combinations, which constitute what we are.
The letters that are imprinted in the 248 organs of a human being, define the nature, temperament and character of each person. His external shape, state of health, and way of thinking.

Because our world is a dual world – composed of contrasts, the influence of the Hebrew letters in the world is also manifested here in two ways:
Each letter has two aspects - positive and negative.
The positive - when its energy flow is harmonious and constructive,
And the negative - when there is an interruption in the energy flow of the letter, and it is manifested through its destructive aspects .

When the letter’s energy flow is balanced, it inspires healing and expansion:
The positive vibration of the letter, stimulates powers of healing and growth and activates them to enable positive changes, and also - clears and removes destructive inclinations.

When the energy of the letter is blocked and disharmonious, its negative qualities are manifested in the form of destruction, inhibitions, difficulties, and imbalance.

The Hebrew letters can empower us through their positive qualities:
When we face complex challenges that we must resolve, the letters can teach us what internal forces we should mobilize to overcome the problem.
We can actually inscribe the positive power of a letter within us to empower and focus on the solution:

How can we learn about the empowering qualities of each letter?
The 22 Gift Cards are designed to help you identify and activate the strengths you need to overcome challenges and difficulties that you are facing.

When we stand confused in front of a significant difficulty, we should draw one “random” card from the set, which carries one Hebrew letter.
This letter will give us the empowerment we need.

Here is an example to illustrate how it works:

From the 22 Gifts cards I drew the Hebrew letter Nun:
The letter Nun connects between the spheres Eternity (נצח) and Yesod (foundation) on the Tree of Life.
It is associated with the water element and the Hebrew month Cheshvan (the Scorpio sign).

It is a powerful and deep letter associated with the soul and symbolizes the Divine spark in the human being.
Its Gematric value is 50 and therefore, it is associated with fifty gates of sanctity, with its positive aspect, and with its negative aspect - with fifty gates of impurity.
Shall we apply its powers in our lives for better or worse?
The letter Nun teaches us that the solution is all about our freedom of choice.

What empowerment can the letter Nun give us?

- The letter Nun shall elevate you to the vibration of abundance, blessings and success.
- It will help you develop a broad world view, powerful, strong presence and good intuitions.
- Nun strengthens your faith, ascends you to a spiritual level to transcend the difficulties of material life,
and will bring you the rewards you deserve after difficult times.
- Nun contributes to stability, permanence and continuity, and assist the fulfillment of long-term investments.
- It will enhance loyalty, and teach you to restrain yourself to avoid falls.
- With its help, you will experience rebirth and recovery after crisis,
and find the strength to release old issues from the past to make way for a better future.

So what do we do to recruit the help of the letter Nun?

We can do this through meditation or visualization:
First, close your eyes, take a deep breath and relax.
Imagine the letter Nun shining before the third eye,
visualize a great light descending from Infinity and passing through it, projecting the image of the letter onto you.
The vibration of the letter Nun penetrates into the body, illuminating you from the inside and outside with healing glow.
This is how the energy of the letter is transmitted to you and inscribed in the body and mind.
Express your request that the power of the letter Nun will strengthen you and give you the mental resources to meet the challenge before you.

So far, we have focused on the positive aspects of letter Nun.
But as we know, every Hebrew letter has its negative aspects as well:

The negative aspects of the letter, can teach us how to approach the challenge before us more effectively,
what we should change in our attitude,
what kind of thoughts weaken our ability to cope, that if we correct them, we can successfully overcome the situation.

Knowing the "absence" that each letter indicates, will help you understand the circumstances in which you are operating, and what may be blocking your progress on a particular topic.
It gives you an accurate assessment of where you stand.
Here you get a lot of food for thought ...

So what can you learn about yourself from the letter Nun?
The letter Nun helps those who have experienced breakdowns and crises in life, and seek the strength to stand on their feet again.
In addition, Nun balances people who tend to be swept away by their urges to the point of self-destruction, acting on instincts,
or suffering from lack of self-control and forget to act by social standards.
Ask yourself
- Do you have a tendency to break frameworks or conventions to satisfy the desire for diversity and changes in life?
Are you doing this to the point of risking the stability of your family or career? This may attract intrigue and trouble to you.
- Do you throw out indiscriminately destructive words and hurt your loved ones?
And the guidance:
- Allow yourself to bite into life with passion, but beware of addiction to delights.
- you should work on strengthening your emotional base to enhance your sense of security and resilience.


As you can see - there is tremendous knowledge in the Hebrew letters, that if we apply it in life, it can help us in many ways.Not just a cute little set of cards...

The “22 Gifts” cards are a real gift for anyone who is seeking empowerment and guidance in challenging times.
In addition to empowering words, the cards will also provide you with essential knowledge about yourself, points of thought, questions you can ask yourself when you get a certain letter from the set, and hints about your current situation. 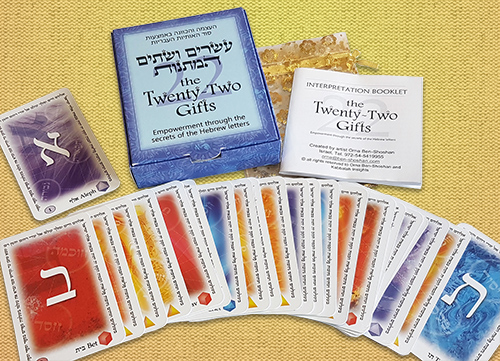 * * If you have not yet purchased these magical cards, you can do so through the Kabbalah Insights website:
https://www.kabbalahinsights.com/en/products/the-twenty-two-gifts

- - Watch a video explaining the hidden and hidden knowledge of the 22 gift cards, and how useful you can get from this small and powerful deck of cards. 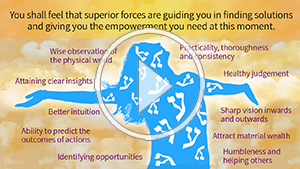